Here at LUXE Models, it’s fair to say we’ve seen more than our fair share of weird over the years. It seems every other day now that some celebrity or well-known public figure is involved in some scandal or horrendous marketing event.

A-listers are hounded by the paparazzi whilst D-listers stand idly by hoping to be accidentally snapped by onlookers. The world is a crazy place. And the world of celebrity culture and fashion is even crazier.

But, even in 2014, where we’re almost immune to the so-called ‘surprising’ news of celebrity nude photos, affairs, breakdowns, fights, binges, whinges, fringes and drug-addled former child star meltdowns, every now and then a story comes a long that raises the bar for modern-day celebrity news.

Katie Price. Yes, Katie ‘Jordan’ Price. Are you surprised? No? Well, yes, there was one piece of news in the past week that really caught our attention. Not in an “oh my god – stop the press” sort of way. But more in a “wow – how am I going to eat my dinner now” sort of way. 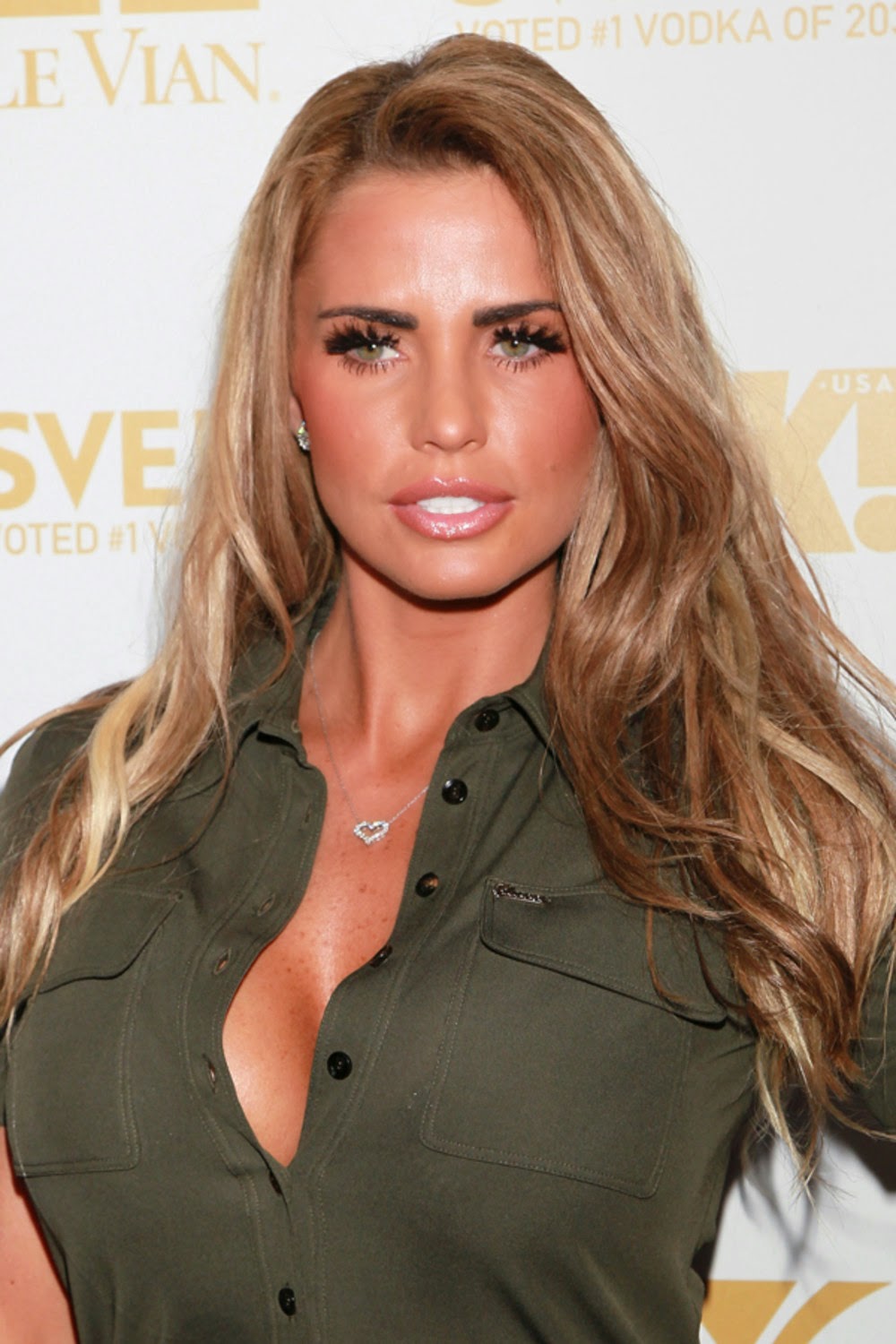 Selling Her Boobs for Charity

Katie Price has offered to sell her old breast implants to raise money for charity. Yes, the former glamour model and reality TV star has recently revealed that she would be happy to sell her old silicon implants in aid of charity.

In a recent interview with The Sun, Katie said:

"We should sell these implants for charity. I've got more pairs in the safe. I love them but I'd sell them in The Sun for a breast cancer charity. I can even sign them with a marker pen. You could have these very breasts right from inside me in a few weeks."

Whilst we admire Katie’s fund raising and charitable spirit, the thought of being the proud owner of a pair of Jordan’s old lady lumps is enough to give us the shivers. But, here at Luxe Models we’re sure there must be someone out there who wants Katie’s old boobs?

For more celebrity news and gossip be sure to stay in touch with LUXE Models on Twitter.
Posted by Unknown at 10:14

What should women wear at work?


Considering the fact that we work in the modelling industry, LUXE Models understands the role that clothing plays when it comes to succeed in the work place. After all, a models whole job is to be seen wearing clothes.

Following shocking comments made by a female project manager on the first episode of this year’s Apprentice, LUXE models asks; what do women need to wear in the work place to succeed?

Whilst a woman needs to look her best, she doesn’t need to lower herself to the level of hiking up her hemline and slathering herself in makeup to succeed. Like a man, she just needs to look professional. 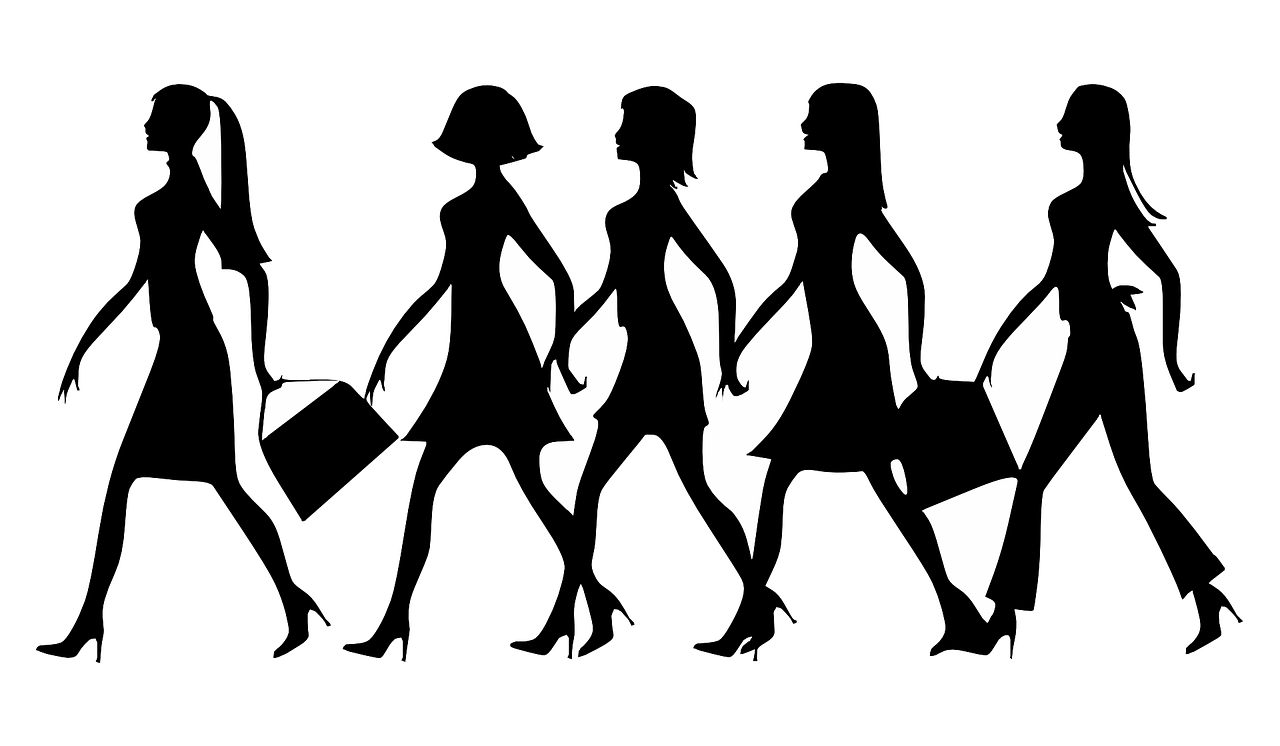 Stereotypes can be wrong

This brings us nicely to the subject of comments made on the first episode of this year’s Apprentice. For their first task, which involved sales, the contestants were divided into two groups; men and women. The women’s group was headed by a contestant by the name of Sarah Dales.

Dales had a pretty controversial strategy when it came to winning the task; which her group did. She said that in sales, “most people will buy from females because females look more attractive.” She went on to advise her group to wear high heels, short skirts and to "bring some nice make up.”


She Wouldn’t Have Lasted Long With Karen Brady

Unsurprisingly a lot of people were shocked by her comments, including one of the UK’s most impressive business women, Karen Brady. Brady is known for having forged legendary career in a notoriously male-dominated vocation at Birmingham City Football Club.

According to Fresh Business Thinking, Brady said that "I think Sarah is rather lucky that I wasn't following her. She may not have lasted very long. I think it's a very old fashioned attitude, that you've got to wear short skirts and a lot of make up to get on in life. Most women will look at that and laugh."

LUXE Models couldn't agree with Brady more. In the modern world, all it takes for a woman to succeed in business is to look her professional best, just like it does for a man. Ultimately, when it comes to fashion in business, you need to wear clothing that not only dresses you for success, but shows you are a serious player in your field.
Posted by Unknown at 14:34

Luxe Models Believes in the Power of Women’s Education

Working in the fashion industry, Luxe Models have seen what a good education can do for women looking to get ahead in this industry.

With education, a woman can evolve in fashion, starting out her career as a model and learning about the industry from the ground up, before moving on to become a celebrated designer. That is why we want to take the time to congratulate Malala this week for winning the Nobel Peace Prize. 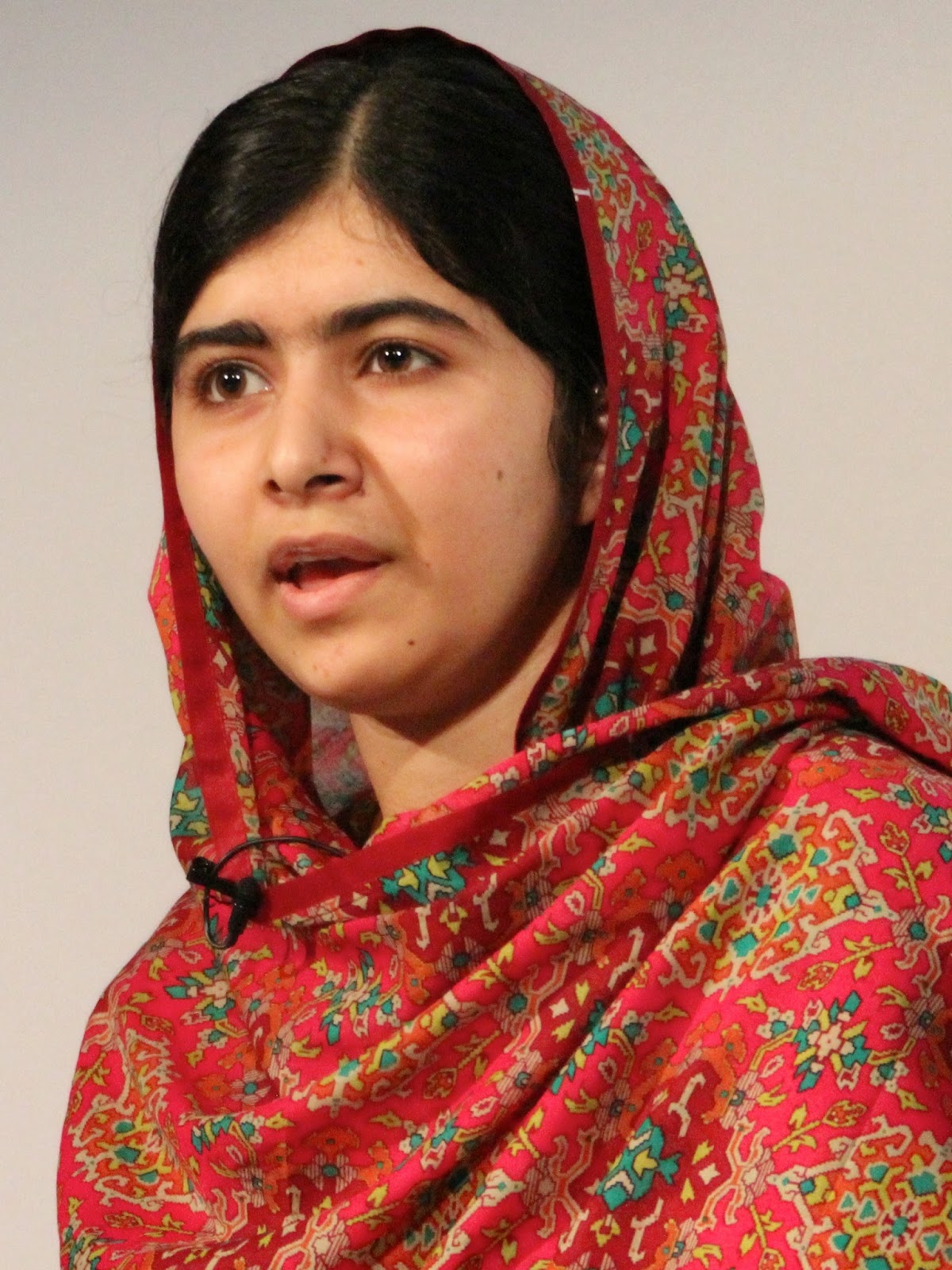 Who is Malala Yousafzai?

For anybody who hasn’t been listening, Malala Yousafzai is a 17 year old girl from the Swat Valley in North-West Pakistan. She first came to prominence as an anonymous blogger for the BBC in 2009. She wrote about her life and the restrictions she faced as a girl wanting an education, during the time her region came under Taliban rule.

Malala’s life changed forever one day in 2012. Whilst riding the bus to her school in the Swat Valley, the Taliban bordered it asking for her. When they found her, they shot her in the head. Miraculously, she survived, after being flown to a hospital in the UK for treatment.

Like any true activist though, the Taliban didn’t manage to keep Malala down for long. What they did to her only made her stronger. Since the attack, she has become a world famous advocate for the right of women to receive an education, even speaking on the subject at the UN in New York.

That work has now been recognised, as according to the BBC, she is one of two people to have won this year’s Nobel Peace Prize, from a list of hundreds. She even won over Pope Francis, who has been heralded for his work in modernising the Catholic Church since he took on the mantel of the Papacy. At 17, she is the youngest person to ever receive the prize.

The other recipient was Indian children’s rights activist, Kailash Satyarthi. In commenting on the pair’s wins, the Nobel Committee commented their "struggle against the suppression of children and young people."

An Example to Us All

So congratulations Malala, it’s a prize that is truly deserved. You act as an example to us all. Through you, the world has been reminded of what a woman is truly capable of when she has the backing of a good education.

For more articles like this, make sure you stay in touch with Luxe Models on Facebook.
Posted by Unknown at 10:53

It’s a Girl for Ashton Kutcher and Mila Kunis!

This week, Luxe Models want to take the opportunity to congratulate one of our fave celeb couples, Ashton Kutcher and Mila Kunis, on the birth of their baby girl.

The Rise of Ashton Kutcher and Mila Kunis

How far have these two Hollywood heavyweights come? From their early days as Jackie and Kelso on That 70’s Show, they’ve both become tinsel town legends in their own right.

She’s stared in a string of movies that have proved a big hit with audiences and critics alike. Most notably, this includes Black Swan, for which she clinched an OSCAR nomination. He meanwhile, has become a household name. Most recently, he’s found renewed TV fame with US small screen giant Two and a Half Men. 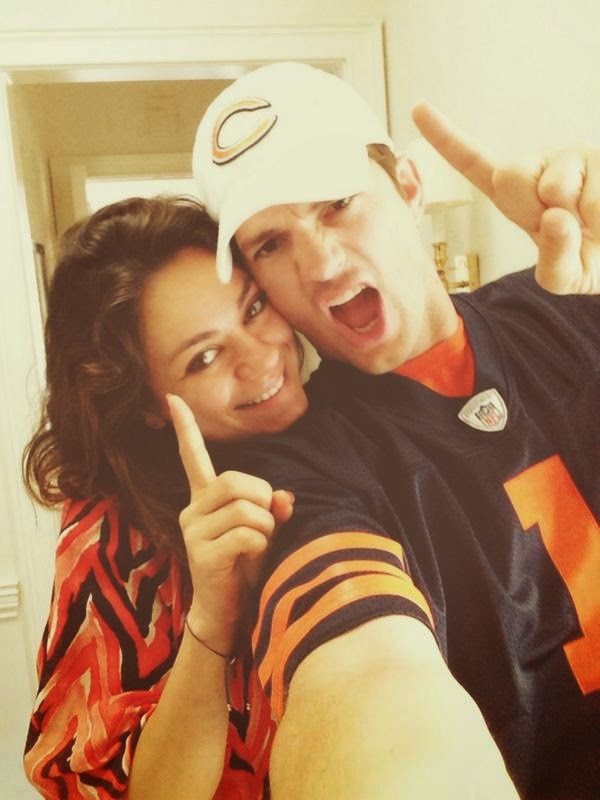 The Love Lives of Ashton Kutcher and Mila Kunis

So it was only natural that these two style icons would eventually gravitate towards each other as the ultimate famous power couple. It may surprise you to know though, that they didn’t get together when they both starred on That 70’s Show. This was despite the fact that their characters were lovers.

Since the show ended, they’ve both become as equally as famous for their love lives as for their burgeoning careers. Kutcher’s love life was never far from the press inches after he entered a relationship and then married legendary A-Lister Demi Moore. Kunis meanwhile, was in a long-term relationship with Home Alone actor Macaulay Culkin for eight years.

They only became an item years later, when they both split with their respective partners. Yet become an item they eventually did, and it’s pretty clear they’re all loved up. They’re so cute together, and their corresponding effortless senses of style gel so well, we coo every time we see a new snap of them in the paps.

So we cheered last May, when Mila Kunis announced that she was carrying the couple’s first child. How fast time flies ey? According to Digital. Spy Kunis has now gone on to give birth to the child. Last Wednesday, she gave birth to a baby girl at Cedars-Sinai Medical Centre in Los Angeles.

One to Watch in the Fashion Stakes

Luxe Models are thrilled for the That 70’s Show alums. After all, his famous take on casual men’s fashion and her penchant for hitting trend every time in a stylish yet provocative manner, means this girl is sure to be one to watch in the fashion stakes as she grows up!
Posted by Unknown at 10:24

Believe it or not, the red carpet prankster has struck once again, so make some popcorn and sit down, as Luxe Models tells you all about it. 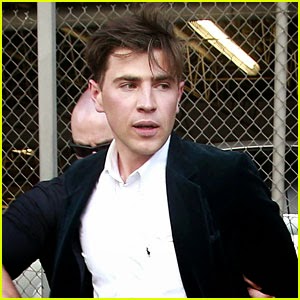 We’re honestly not sure if we love or hate the red carpet prankster here at Luxe Models. Admittedly, taking a celebrity down a notch or two is something we like seeing, but he does have a tendency to go too far.

Let us explain. Ukrainian media personality, Vitalii Sediuk, seems to have made it his mission in life to hound the celeb set, as they’re swanning in their designer threads down the red carpet.

It can be hilarious, but when he does stuff like punch Brad Pitt, or kiss Will Smith, of which he has done both before, he kind of crosses from funny prankster into the realm of scary stalker.

He was most definitely the latter in his latest stunt, which took place last week. So what did he do? Well he tackled Kim Kardashian West while she was sashaying down the red carpet for the Balmain show at Paris Fashion Week.

Gossip site Digital Spy featured footage of the incident last week, and you can clearly see the reality star’s legs being tackled by the arguably mentally unhinged prankster as she gets out of a car.

However, he was quickly lifted away by security, who then went on to help Kardashian West, along with her husband Kanye and mum Kris Jenner, into the building.

Obviously, the Kardashian camp has said absolutely nothing about this at the time of writing – they’re not likely too, but a spokesperson for the celebrity hounder has commented. All they said was that Sediuk did manage to tackle Kim’s legs. That’s not really helpful, is it?

Nothing Should Draw Attention Away from Paris Fashion Week!

Was there actually any point to this? We admit, it gave us something to talk about around the water cooler, but there’s one reason we’re really annoyed about it. It drew attention away from Paris Fashion Week. That is no in way acceptable, as it featured some exciting summer 2015 trends we can’t wait to have stocked in our wardrobe!

For more stories and updates like this, be sure to stay in touch with Luxe Models on Facebook!
Posted by Unknown at 09:41