Reality TV star Kim Kardashian-West is one of the most famous fashion icons on earth. Everywhere she goes, Kim attracts the spotlight and sparks tabloid headlines. It should come as no surprise then, that Kim absolutely stole the show at the Balmain Paris Fashion Week Spring/Summer 2017 event.

Kim Kardashian is rapidly becoming a style icon. As an example, remember when Kim unveiled a new ‘do, dying her luscious brunette locks vivid blond? Kim’s radical hair change made headlines the world over, showing just how much influence she has on the global fashion scene right now. 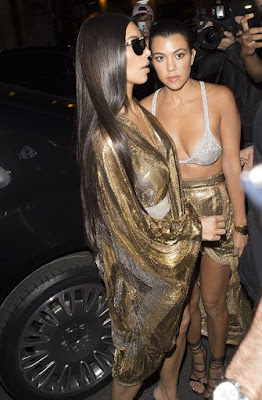 Kim Kardashian also has something of a penchant for shocking people. Who can forget the time Kim broke the internet by showing off her famous derrière on the cover of Paper Magazine? We especially loved that shot of Kim in a sequined black dress, popping a Champagne bottle which flowed over her head and onto her booty. So what happens when you combine Kim’s chic style with her love of shocking people? We found out at the recent Balmain show at Paris Fashion Week.

Established in 1946, Balmain is one of France’s most respected Fashion Houses. Balmain’s Paris Fashion Week Spring/Summer 2017 jungle-themed show was a sight to behold, according to Vogue. During the event, top models like Gigi Hadid rocked a range of ultra-cool trends, from asymmetrical bra-tops and jewel-toned snake prints, to daring cut-out dresses and rainbow crocheted pieces.

But while the Balmain event was a triumph, attendee Kim Kardashian stole the show. Kim was seated on the front row (obviously) of the Balmain display, between mum/manager Kris Jenner, sister/co-star Kourtney Kardashian and CR Fashion Book Editor-In-Chief Carine Roitfield. All four women sported glamorous looks at Balmain, but only Kim managed to generate more headlines than the event itself.

Why? Kim rocked up to the Balmain showcase wearing what USA Today describes as “a metallic, loosely-knit dress that left little for the imagination to keep up with.” Daring, yet totally on trend, Kim’s risqué fishnet, floor-length number, which she teamed with killer black wedges, totally worked!

Kim Kardashian, we take our hats off to you! Once again, you have shown that you’re a style innovator, always looking to push the boundaries of good taste on everyone else’s behalf! We can’t wait to see how fashion brands and retailers take this soon-to-be-iconic dress and make it work on the high street!
Posted by Unknown at 14:43

How To Wear Yellow – Next Season’s Hottest Colour

If we learned anything from New York Fashion Week Spring/Summer 2017, it’s that yellow is set to be next season’s hottest colour. But this shade is notoriously hard to pull off so you might need a little help rocking yellow. Here LUXE Models explains how to wear yellow with style.

Vogue writes that the first step to rocking yellow is finding the right shade. First, determine which tone in the yellow rainbow works with your skin, so your clothes don’t make you look washed out. Then, determine which other colours work with your chosen shades of yellow. Be warned that if you decide to wear yellow-on-yellow, you need to wear two separate shades to make sure that your outfit actually works.

With yellow, you need to go hard or go home. The Telegraph reveals that one way to master this difficult shade is to find a strong colour for yellow to stand up against. Try pairing yellow with bold primary colours if you want to play it safe and cultivate a retro look. But if you want to experiment a little, go for weirder pairings like lemon and bubble-gum or mustard and grey! 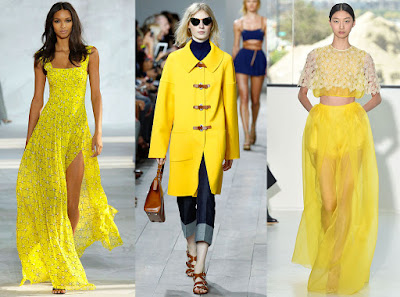 You can’t go wrong by seeing how the experts include yellow in their designs. At New York Fashion Week Spring/Summer 2017, we saw designers use every shade of yellow, from zingy-lemon to mustard, so there are examples for whichever shade you choose. We particularly loved the Thakoon show, which saw muted mustards teamed with fabulous gold statement earrings – a winning combo!

Sometimes, yellow shines when it’s highlighted by a muted background. Try teaming neutral, calm colours with one yellow piece. Opt for bright yellow heels or a bag, to make a real statement. But if you want to play it safe, try something subtle like adding a yellow charm to your tote bag. You could also try wearing matching yellow accessories with a neutral outfit to take this look to new extremes!


Be careful with black

Despite popular opinion, you can pair yellow with black. But you have to be really careful, otherwise you could end up looking like a bumble bee. The trick here is to add in a third colour, so you can break up the sea of yellow and black. Let’s say for instance, you decide to toughen up a yellow dress by throwing on a black leather jacket. Add a coral scarf to be chic and make this look really work!

It’s important to point out that yellow is a really happy colour. If you want to find a way to make this tricky shade work for you next season, cast the rule book aside and have some fun. Get experimental and weird because you never know, you could stumble on a really innovative way to wear this most brilliant yet difficult of shades!
Posted by Unknown at 11:07

As a fashion model, you’ll be expected to strut down runways while wearing killer heels. In New York Fashion Week. which ran from 7th to 14th September, we learned that even the most professional of models have trouble with heels. While appearing at the Michael Kors show, the gorgeous Bella Hadid, who was rocking a sparkling ruffled black dress, tripped over her sky-high heels. But like any professional, glamorous Bella got right back up again!

We discovered that yellow is destined to be the season’s hottest colour. Every shade of yellow, from zingy-lemon to mustard, appeared on the New York Spring/Summer 2017 runways. Alexander Wang caused a real stir by opting for highlighter pen neon yellow while Thakoon raised cheers with a more muted mustard tone, which looked really fresh when paired with statement gold earrings.

New York’s catwalks were littered with hot clothing trends. With the latest September fashion covers, we saw that cut-outs are set to be huge and this trend also appeared at Fashion Week. Other clothing trends revealed included deconstructed shirts, which wowed Carolina Herrara’s audience, ruffles and slip-one shoes. Tibi’s black slip-on shoes, which had cigarette lighter-sized heels, were amazing!

We saw a ton of new beauty fads which are destined to become trendy in Spring/Summer 2017. Grazia writes that surfer-girl beach hair was a real hit at Alexander Wang’s show, while designers such as Jason Wu confirmed that bright matte lips will be hot next season. Other emerging beauty trends included pastel-wash eyeshadow, neon-orange nails and snapchat filter-inspired beauty accessories.

Here at LUXE Models, we had a few doubts when we found that rapper (and professional egoist) Kanye West was going to debut his ‘Yeezy Season 4’ line in New York. The concert/performance piece of a show was a hot mess, with some models even passing out, making headlines around the world. Adding salt to the wound, celebrated fashion consultant Tim Gunn later labelled the collection “a hoax.”

See you in London

And with that, we wave goodbye to another New York Fashion Week and we’ll see you in London. With a number of respected designers and brands, including Top Shop, Christopher Kane to Burberry set to unveil their new collections at London Fashion Week Spring/Sumer 2017, it’s sure to be epic!
Posted by Unknown at 09:46

In the words of former US Vogue Creative Director Candy Pratts Price, September is the January of fashion. Not only do brands and magazines compete for the best stars, but it's also the month of New York Fashion week. Here, LUXE Models reveals the September 2016 fashion covers.

Vogue editor Anna Wintour is perhaps the most iconic person in the industry today. She is the ultimate trendsetter so when she does something, other fashion magazine editors follow. One of the most notable policies Anna has set up at Vogue is making September the magazine’s standout month.

Who What Wear reveals that R.J. Cutler’s 2009 documentary, The September Issue, was a landmark moment in fashion. Cutler’s piece chronicled the process of making Vogue’s iconic September issue, pushing this concept into the mainstream. Today major fashion publications, from Vogue and Elle to Marie Claire and Glamour compete every year to see who has the biggest September issue. 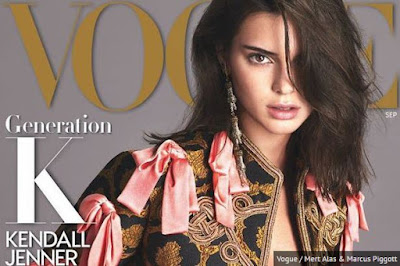 We already knew what to expect from Vogue this year.  LUXE Models previously wrote that model and Instagram star Kendall Jenner was fronting Vogue’s September 2016 issue. With Kendall rocking the modern Marie Antoinette look, complete with a pink ribbon-adorned, black and gold matador jack and matching trousers, Vogue made it clear that head-to-toe patterns are so hot right now!

We also knew ahead of time that Elle UK would release five September 2016 covers, including one featuring Zayn Malik. Elle US has now launched its 2016 September 2016 issue, which depicts Cara Delevingne on the front. Elle US opted to champion the sequin overload trend that’s really popular right now, dressing Cara in a purple sequined, disco diva style outfit that just screams fabulous!

E! Online recently featured a round-up of September 2016 covers. We have to give props to Glamour, whose cover featured mega-star fashion model Bella Hadid. Glamour’s cover, interestingly, wasn’t about the clothes, with Bella rocking a diamond-encrusted shirt and a red hoodie. The centrepiece was her bare-faced beauty look, showing that the minimal make-up trend has never been cooler.

Nobody could call the Cosmopolitan cover, which starred Gwen Stefani, understated. The Hollaback girl looked awesome, rocking a bright gold, precious stone-adorned, cut-out dress, going total bombshell. InStyle opted for a softer look, dressing its cover star, actress Kerry Washington, in autumn ingénue chic, making it clear that green and plum is set to be the colour pallet of the next season!

With their September 2016 covers, the biggest fashion magazines in the world have revealed the coming season’s hottest trends. If you’re an aspiring model, pour over these issues, so you can wear the latest styles while shooting the pictures you’ll need to build your modelling portfolio! By showing such an eye for fashion, you could catch the attention of top modelling agencies!
Posted by Unknown at 14:36

Break into male modelling and a whole new world will open up before your eyes. You’ll get to work with cool people, see the world and possibly even become a star like Lucky Blue Smith. The industry’s latest ‘it boy,’ as far as male modelling success stories go, it doesn’t get better than Lucky.

Raised in small town Utah, Lucky Blue Smith grew up to become a six-foot-two-inch Adonis. According to Business of Fashion, Lucky’s older sister Daisy Clementine was scouted before him, when he was just ten years old, by Next Models Los Angeles. They told him to come back in two years.
Read the article in full with LUXE Models. 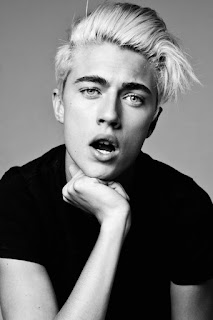 The bi-annual London Fashion Week is one of the biggest events in fashion. Every time it rolls around, top models, designers and industry insiders gather to reveal the next season’s trends. If this is your idea of heaven, find out how to watch the next London Fashion Week with LUXE Models. 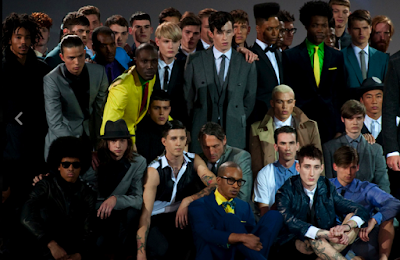