Stop the presses. Luxe Models has just learned something that is about to change your lives… alright, change your day at least. Global icon Kim Kardashian West has unveiled her latest hairstyle. It practically broke the internet.

We can’t help but adore the reality TV star here at Luxe Models. OK, she became famous because of a seedy sex tape and a so-obviously-scripted reality TV show but Kim K is so much more than her beginnings.

Love her or hate her, you’ve got to admire her. Kim Kardashian West has capitalised on her five minutes of fame to turn it into the kind of notoriety that could very well last a lifetime. Today she’s a celebrity, business woman and yes, a fashion icon. She’s got a wicked sense of style. 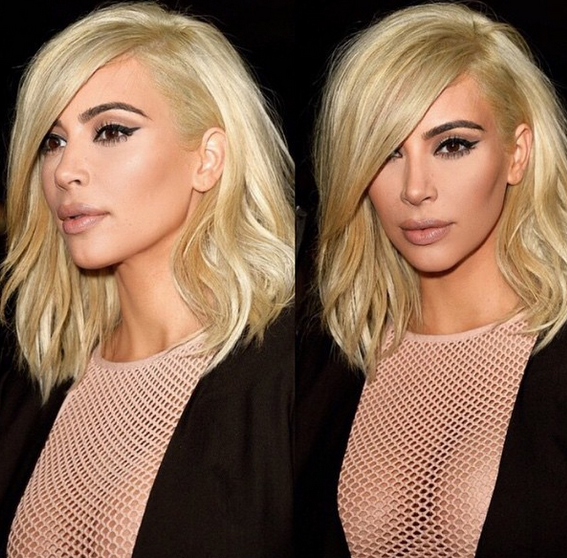 Her flair for fashion was made apparent recently when she unveiled a striking new hairstyle. She died it platinum blonde. Yes, you read right. Platinum blonde.

According to the Guardian the international star unveiled the look as she arrived at the Balmain fashion show at Paris Fashion Week. It looks like she’s intended to keep it under wraps, as he initially arrived at the event complete with big knitted wool hat. However reporters kept spotting little blonde hairs peeking out under the hat so she chose to throw caution to the wind, remove the garment and showcase her new dye-job to the world.

And promptly the internet broke. Gossip fanatics everywhere immediately took to Twitter to post their opinion of the stars controversial new look. The Daily Mail reported that it spurred a number of Legolas-inspired memes. For the non-geeks out there reading this article, he’s the elf from Lord of the Rings with shocking platinum locks.

Her hair was also compared to that of Draco Malfoy, the teenage nemesis of the title character in the Harry Potter books and movies. The actor who played the pureblood in the film version of the franchise, Tom Felton, even got in on the joke himself. Sharing a picture of Kim's face photoshopped onto the body of his character, the actor tweeted: “So apparently Kanye has a Draco fetish #muse.”

More than anything this just shows how influential Kim Kardashian West has become as an icon of modern fashion and celebrity. Her dramatic new hair style may have been routinely mocked across the internet but everyone was talking about it. That sounds like an icon to us here at Luxe Models!