Welcome to our new LUXE Models success stories series, where we look at how some of the world’s most famous models became household names. First up, Naomi Campbell – the woman who changed the face of modelling forever.

Naomi Campbell was born in Streatham, London. She had an extraordinarily international upbringing.  During her early years Naomi lived in global fashion centre Rome – where her mother worked as an exotic dancer. She was born for the stage; starting from age three she attended the Barbara Speake Stage School and at age ten, she studied ballet at the Italia Conti Academy of Theatre Arts in London.

But becoming a model was always Naomi’s true destiny. According to her official website, Campbell caught her big break in the industry at the tender age of 15. She was scouted by Beth Boldt, the head of the Synchro Model Agency, while window-shopping in the famous Covent Garden district of London. Boldt signed Campbell and after that, the only way was up.

What’s amazing about Naomi is that she isn’t just a model – she’s turned herself into a lucrative brand. First, she’s established something of an acting career, putting her early training to good use. Over the years Campbell has appeared on TV programmes such as The Cosby Show and The Fresh Prince of Bel-Air, as well as music videos such as Michael Jackson’s ‘In the Closet’ and Madonna’s ‘Erotica.’

By 1998 (when TIME Magazine declared the end of the ‘supermodel’ era), Campbell had mostly retired from the catwalk. But she kept herself busy with a number of projects. Naomi’s launched fragrances, continued doing print-work and forged a career in realty TV. Notably, she executive produced and served as a ‘supermodel coach’ on The Face, which on the US’ Oxygen Channel in 2012.

Naomi Campbell serves as the ultimate modelling success story. Spotted at 15, she became one of the most famous models in the world, broke down racial barriers and turned herself into a recognisable brand – changing the face of the industry at every turn throughout her career.
Posted by Unknown at 13:14

How to Pull Off ‘Galactic Blue’ Lips

Did you see Lupita Nyong’o at last month’s Star Wars: The Force Awakens London premier? Her lips looked stunning! If you want to emulate her fabulous look stick around, as LUXE Models explains how to pull off ‘galactic blue’ lips!

Lily-Rose Depp, the daughter of celebrated actor Johnny Depp and French singer Vanessa Paradis, recently posed for the cover of Love Magazine, a fashion, style and culture publication. Lily-Rose’s breath-taking turn on the cover of Love confirmed that blue is the must-have make-up trend of 2016!

According to Cosmopolitan Magazine, every shade of blue, from brilliant cobalt to jean navy to metallic azure, is totally in right now. Lily-Rose’s take on the trend was rather extreme; she rocked vivid-blue 80s-style eye shadow, teaming it with yellows and oranges and topping the look off with gorgeous pink cheeks and lips. But you don’t have to go that extreme to get this trend right.

Want someone to show you how to nail the blue make-up trend? Look no further than OSCAR winning actress Lupita Nyong’o. The 12 Years a Slave star recently featured in the blockbuster smash Star Wars: The Force Awakens and opted for blue make-up when she attended the film’s London premier in December 2015.

She didn’t go as far as Lily Rose-Depp. In honour of Star Wars, Lupita wore what can only be described as ‘Galactic blue lips.’ This oddly elegant shade of sapphire was mind-blowing, and her decision to pair it with statement gold-scarlet earrings and a black, long-sleeved dress was inspired. So how can you copy Lupita’s lips? Luckily for you the man behind the look, make-up artist Nick Barose, recently explained how he did it to Glamour Magazine.

Commenting on his process, Barose said: “To create the perfect lip art with a galactic blue shade, you have to get creative. Sometimes you can actually mix in eye products too—whatever it takes to get the right colour. ” He started by prepping Lupita’s lips with balm and then, according to Barose, he “used [Lancôme] ‘Drama Liqui-pencil in Minuit’ to trace and fill in [her] lips to create a base colour.”

Continuing, Barose explained: “Next, with a lip brush I dabbed a bit of the balm on top of the colour. Last, I applied ‘Colour Design Eyeshade in Sapphire Lace,’ a metallic blue, in the centre of the lips to brighten and enhance the metallic effect." So basically to create Lupita’s ‘galactic blue’ lips, you need to prep your lips with balm, fill them with a deep blue eyeliner and then colour over the centre of your mouth with a metallic lapis eyeshadow, then top off with another layer of balm to finish!

Here at LUXE Models, we’d suggest that if you’re wanting to wear ‘galactic blue’ lips at some point in 2016, you follow Lupita’s example on how to pull them off. Team this statement look with subtle clothes and accessories so your vibrant lips can shine!
Posted by Unknown at 11:39

Business news site Forbes recently revealed that pleats are set to be huge in 2016. The issue with this trend is that it can be hard to pull off pleats without looking a little preppy. Here comes LUXE Models to the rescue; below we’ve listed five tips you can use to rock a pleated skirt this year!

Cultivate a slimming look by emphasising the waistband of your pleated skirt. We’d suggest you go a little risqué in 2016 and team your pleated skirt with a modernised version of the 90s crop top – a look that screams cool, rebellious class!

Ask this important question before you don a pleated skirt; “what am I going to wear on top?” This style of skirt cuts the body off at the waist, giving you the chance to create an outfit with beautiful contrasts if you pick a good top to pair it with. Go nuts; patterns, prints, block-colours, long-sleeves, short-sleeves – they all go great with a pleated skirt! 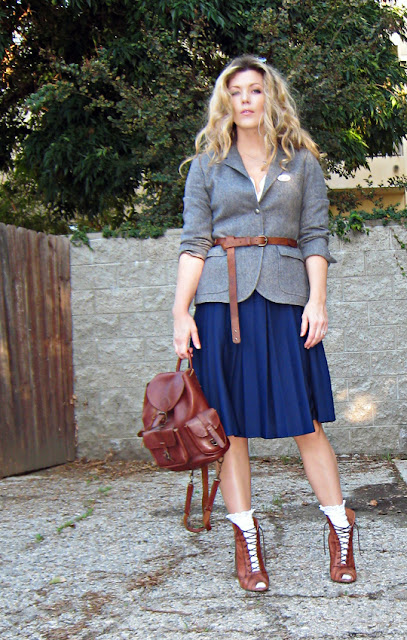 Pleated skirts draw attention to your legs, giving you a fantastic chance to rock some killer footwear. If you want to avoid the preppy look you may want to refrain from wearing flats. Instead, team your pleated skirt with stilettos, edgy booties, feminine sandals, sleek pumps or 70s style heeled boots to create a supremely elegant look!

4. Think about your body

Choose the pleated skirt that’s most likely to flatter your figure. If you have a generous set of curves you might want to opt for a skirt made from light, flowy fabric to refrain from adding bulk to your waist. Meanwhile if you’ve got shorter legs, you may want to go with a pleated skirt that boasts a higher hemline, so you avoid cutting off your calves!

Pleats make a bold statement, so you may want to resist overcrowding your outfit. This style of skirt suits just about any type of accessory but the key is to keep it simple. For example if you team your pleated skirt with a thin belt – a great way to show off your waist by the way, you might want to stay clear of statement jewellery.

Be creative with LUXE

Far from preppy, pleated skirts can provide you with the chance to create a cool, sophisticated look. Embrace your inner rock star and get a little creative when you decide to wear one. The right pleated skirt for your body-shape can make you look smoking hot if you team it with some mind-blowing accessories, beautiful footwear and a phenomenal top!
Posted by Unknown at 11:38

Pinterest recently revealed the fashion trends you need to watch out for this year. Luxe Models reviews what they think is going to be big in 2016.

‘Pinterest’ is a visual-focused social networking website. It allows users to visually share and discover new trends by posting (known as ‘pinning’ on Pinterest) images and videos to their own or others’ ‘boards’ (a collection ‘pins’ that usually have a common theme).

The site is rapidly becoming the place where new fashion trends emerge, as many people are starting to post pictures of looks and styles they like to their boards on Pinterest. The social networking site gathers data from its 100 million users every year to compiled the annual Pinterest 100 – a curated board of fashion trend predictions for the coming year. They recently released the Pinterest 100 list for 2016 – so what trends should you keep an eye out for next year?

2015 was the year of Adele. The British singer-song writer released her highly anticipated album 25 in November 2015 and it was huge. Pinterest noted that people posted a lot of pictures of the ‘Adele eye,’ depicting the singers’ signature cat-eye makeup, last year. With stars such as Diane Kruger and Jennifer Hudson also adopting the style, it could be everywhere in 2016.

According to Pinterest, 2016 will be the year we all decide to throw every fashion rule in the book out the window. Mixing textures and patterns, normally something of a no-no in fashion, will be in. Expect to see a lot of crazy cool, if somewhat offbeat, outfits on the streets next year. If you want to try this trend go really avante garde and team a wacky outfit with statement sunglasses or vintage broaches (which will also be huge in the next 12 months), so really go all out!

Anyone who remembers the 90s will recall that it was the decade of the ‘bum bag.’ These very distinct items flew out of fashion at a pace we can only call stunning in the 2000s, but Pinterest noted people are starting to like them again. US news outlet Today reported that these items, which have been re-christened ‘belt begs’ and reimagined in leather and suede, are set to be everywhere in 2016.

If you’re a fan of the low-key look, you’ll be happy to hear that ‘Athleisure’ is predicted to be a big trend this year. ‘Athleisure’ is basically used to describe the act of wearing gym clothes while out and about. Pinterest revealed that athleisure looks were ‘pinned’ 21 million times in 2015 – so it’s only going to get bigger going forward. It might be time to break out your trainers and yoga pants!

Androgyny was one of the biggest fashion events of 2015. Don’t expect this gender-blurring trend to go anywhere this year; online pop culture publication Popsugar noted Pinterest believes 2016 will be the “year of androgyny.”  Women everywhere will be wearing classically masculine pieces such as relaxed denim and tailored blazers over the course of the coming 12 months.

Of course, there’s only so much Pinterest can predict. The site used the pictures people posted in 2015 to determine what would be hot in the world of fashion in 2016. However, you never really know what’ going to happen when it comes to fashion.  Check back to the Luxe Models blog to find out about the biggest style trends set to rock the world of fashion this year!
Posted by Unknown at 11:38